Early childhood education is proven to help children succeed in education and life.

Kidamentals is reprinting this summary with the permission of heckmanequation.org in accordance with their Usage Policy as shown here

James J. Heckman is the Henry Schultz Distinguished Service Professor of Economics at the University of Chicago, a Nobel Memorial Prize winner in economics and an expert in the economics of human development. His groundbreaking work with a consortium of economists, developmental psychologists, sociologists, statisticians and neuroscientists has shown that quality early childhood development heavily influences health, economic and social outcomes for individuals and society at large. Heckman has shown that there are great economic gains to be had by investing in early childhood development.

Heckman’s “short summary on how investment in early childhood development can strengthen the economy” can also be viewed directly at heckmanequation.org here:

James J. Heckman is the Henry Schultz Distinguished Service Professor of Economics at The University of Chicago, a Nobel Laureate in Economics and an expert in the economics of human development.

“The highest rate of return in early childhood development comes from investing as early as possible, from birth through age five, in disadvantaged families. Starting at age three or four is too little too late, as it fails to recognize that skills beget skills in a complementary and dynamic way. Efforts should focus on the first years for the greatest efficiency and effectiveness. The best investment is in quality early childhood development from birth to five for disadvantaged children and their families.”

Those seeking to reduce deficits and strengthen the economy should make significant investments in early childhood education.

A critical time to shape productivity is from birth to age five, when the brain develops rapidly to build the foundation of cognitive and character skills necessary for success in school, health, career and life. Early childhood education fosters cognitive skills along with attentiveness, motivation, self-control and sociability—the character skills that turn knowledge into know-how and people into productive citizens.

Investing in early childhood education for at-risk children is an effective strategy for reducing social costs.

Every child needs effective early childhood supports— and at-risk children from disadvantaged environments are least likely to get them. They come from families who lack the education, social and economic resources to provide the early developmental stimulation that is so helpful for success in school, college, career and life. Poor health, dropout rates, poverty and crime—we can address these problems and substantially reduce their costs to taxpayers by investing in developmental opportunities for at-risk children.

Our economic future depends on providing the tools for upward mobility and building a highly educated, skilled workforce. Early childhood education is the most efficient way to accomplish these goals:

Keep these principles in mind to make efficient and effective public investments that reduce deficits and strengthen the economy:

Investing in early childhood education is a cost effective strategy—even during a budget crisis.

Deficit reduction will only come from wiser investment of public and private dollars. Data show that one of the most effective strategies for economic growth is investing in the developmental growth of at-risk young children. Short-term costs are more than offset by the immediate and long-term benefits through reduction in the need for special education and remediation, better health outcomes, reduced need for social services, lower criminal justice costs and increased self-sufficiency and productivity among families.

All families are under increasing strain; disadvantaged families are strained to the limit. They have fewer resources to invest in effective early development. Without resources such as “parent coaching” and early childhood education programs, many at-risk children miss the developmental growth that is the foundation for success. They will suffer for the rest of their lives—and all of us will pay the price in higher social costs and declining economic fortunes.

Provide developmental resources to children AND their families.

Direct investment in the child’s early development is complemented by investment in parents and family environments. Quality early childhood education from birth to age five, coupled with parent coaching, such as home visitation programs for parents and teen mothers, has proven to be effective and warrants more investment.

Invest in developmental resources for at-risk children. Develop their cognitive and character skills from birth to age five, when it matters most. Sustain gains in early development with effective education through to adulthood. Gain more capable, productive and valuable citizens who pay dividends for generations to come. 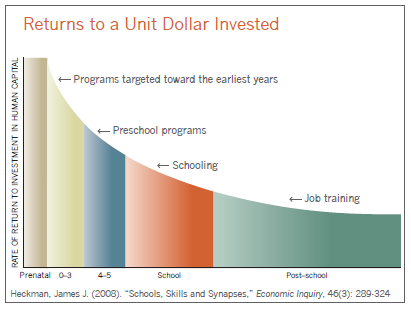 Early childhood education is an efficient and effective investment for economic and workforce development. The earlier the investment, the greater the return on investment.